By Lucy Roleff
Because of the size, the last two paragraphs were cut out, the article can be read in full here.
tinybuddha.com/blog/let-it-be-using-mind...-anxiety-depression/

“Perhaps many things inside you have been transformed; perhaps somewhere, someplace deep inside your being, you have undergone important changes while you were sad.” ~Rainer Maria Rilke

When I was twelve years old, I figured out how to get out of things.
It was a rainy Saturday morning and I was supposed to be getting ready for choir practice—an eight-hour rehearsal before a big concert. Eight hours! I began to obsess about how much time this was in my then tiny life.
As though by my own will, a heavy sensation of dread and nausea arose. I wasn’t aware of it at the time but my brain had said to my body, “Hey, if you feel sick, we can get out of this!”

Unfortunately for me, this would happen many more times, well into my adult life.

Commitment equaling nausea coupled with a terrible fear of vomiting. Concerts, sport events, sleep overs at friends’ houses—any situation that might be awkward to get out of.

It wasn’t until I was sixteen that it started affecting school. Too paralyzed to turn up to the first day of year eleven, I was taken to the doctor. She said I was anxious. She prescribed Effexor, an anti depressant. I wasn’t depressed. I would end up taking one tablet everyday for the next eight years.

At twenty-four, a friend made a comment: “I don’t think those tablets are actually treating what you think they’re treating. Maybe you would be fine without them.”

I realized then that I had been swallowing them purely out of habit. Maybe they had been my crutch—a morning ritual to keep the wolves at bay. By that time I wasn’t really experiencing too many of the attacks. I felt okay. I started to slowly wean myself off the medication while on a trip overseas.

The withdrawal symptoms were horrendous, but I came through—a bit dazed and spaced-out but “clean” nonetheless.

I returned home. At first I was happy, comforted by the familiarity of my pets and family. But something was slightly off. I started having strange thoughts—negative and disarming.

Usually one might shrug such moods off but they came with such conviction that I began to worry. I Googled: “Why don’t I want to do anything anymore?” and “Why do I feel detached?”

A month later I experienced what one might call a nervous breakdown. Lying in bed watching a film, something in me clicked: “Life is meaningless.”

A horrific wave of panic and racing thoughts ensued. My mind was trapped in cycles of anxious rumination and would go on like this for months, with little to no respite except in sleep.

Everything seemed bizarre and pointless and menacing. Worst of all it felt as though, despite their best efforts, nobody could reach me.

Anxiety is not the nerves you feel before a performance. It is not the quickening heart upon realizing you left the stove on at home. Anyone who says, “Just relax!” to a person who is experiencing anxiety or depression should know this; they just cannot. Not yet anyway.

Both are fuelled by worry. Not only about these new and disorienting sensations, but also of the thought “Will I be this way forever?”

I tried CBT and it was a waste of time. Maybe I sought the wrong psychologist, but she seemed more concerned with the small clock on her table than my exasperated tears.

I was prescribed anti-depressants again—but even through the hardest days, a tiny voice inside said “No drugs. Just wait. Please.”

I found another psychologist, a Romanian man who was kind and spoke my language. I bought $300 worth of useless supplements. Trial and error.

Anxiety plays tricks. It tells you that everything you feel is serious. Depression paints everything in black and white. Together, they skew perceptions.

One day I became truly convinced I was developing schizophrenia. I Googled “disturbing thoughts.” This time I stumbled upon a website called Anxiety No More, created by a man named Paul David, an ex-sufferer himself.

It summed up every symptom I had—racing and disturbing thoughts, dizziness, panic, depressed feelings, detached feelings, plus a myriad of others. Paul had suffered anxiety and came through completely unscathed. The answer? No drugs and no expensive smoke cleansing rituals.

The answer was so beautiful and near unbelievable in its simplicity: Stop fighting it. Let it come.

This was the first breakthrough for me, and from then on I became determined to learn as much as I could about the human brain; why we experience anxiety and depression.

I learned that those born post 1940 are ten times more likely to experience depression. This indicated that in many cases, life events are to blame; the stress we endure, assuming we are unbreakable. You only need to watch someone trying to balance two iPhones, a laptop, and an iPad on one knee to see how we even overload ourselves.

I learned that anxiety is a slow-to-evolve trait leftover from our prehistoric ancestors (apparently our brains haven’t received the memo that the lions are no longer lurking behind bushes.)

And depression? In many cases it is the brain saying, “I can only handle so much! Bye!” and feelings are seemingly switched off—a defense mechanism.

That is not to discredit cases of severe depression caused by other factors where medication is necessary, but knowing how easily and frequently anti-depressants are prescribed, one has to ask: at what cost exactly?

Are we perhaps interfering with a natural defense process that might be best left to run its course, approached with patience instead of a ‘fighting’ attitude?

I had read all the books. I was meditating daily with soothing music and practicing breathing exercises.

I let the panicked feelings come and go and surely enough, over time they lessened until I no longer anticipated them. Feelings came back. I could laugh. I felt battered and worn, but hopeful.

But still the dark thoughts would seep in, slowly swelling in my mind. Heavy as wet wool. Despite my best efforts, I was left in depression and wanted so terribly not to be.

Sure, thoughts came with less urgency, but they were still there and I remained in a daze, as though I was swimming an inch away from reality.

I Googled. I was lead to mindfulness.

Mindfulness—the final stepping-stone of my path to healing.

It was intuition that led me to the practice of mindfulness. All along, medication and CBT felt wrong for me. Even chanting affirmations, burning lavender candles, and distracting techniques seemed unproductive—as though I was telling my mind “This is a thing that must be gotten rid of!”

It really is the equivalent to “Don’t think about pink elephants!” Of course we will. It is in our nature.

The great revelation came when I was listening to a podcast about mindfulness and secular Buddhism by a man named Peter Strong, a mindfulness expert and Skype counselor. His own experience with anxiety and depression as a young adult mirrored my own.

I organized a Skype session with Peter, excited to learn more about mindfulness and encouraged by what I had read.

I confessed to him that I saw breathing exercises as an attempt to distract. He said, “Yes. It’s a tool. Mindfulness is all in the subtleties.” Then he paused and told me, “Instead, when thoughts and feelings come, you simply say to them ‘Hello. I see you. Welcome.’”

After almost two years of struggling with my mind, the battle was coming to an end. I let the thoughts in. I let them stay. I treated them as one might a small wounded bird. Compassionately.

As promised, the negative taboo enshrouding them dissolved. The rumination stopped. I finally felt free.

It is my genuine wish that no one suffer needlessly as I did and as so many others do. My story was one of trial and error, one that has taken almost two years.

I think if I had discovered mindfulness earlier
My Word is my Honor, and my Honor is my Life ~ Sturm Brightblade
Passion, yet Serenity
Knighted Apprentice Arisaig
TM- RyuJin
Last edit: 12 Dec 2013 18:40 by Zenchi.

12 Dec 2013 20:10 #128426 by Brian
Replied by Brian on topic Using Mindfulness to overcome depression...
For myself, the thing that worked for me in combating anxiety and depression was to simply embrace the light of The Force, to let The Force guide me, as difficult as that was at times.

Brian wrote: For myself, the thing that worked for me in combating anxiety and depression was to simply embrace the light of The Force, to let The Force guide me, as difficult as that was at times.

In all honesty, it could easily be said that one must develop a sense of "mindfulness" in order to connect with the Force...[/color]
My Word is my Honor, and my Honor is my Life ~ Sturm Brightblade
Passion, yet Serenity
Knighted Apprentice Arisaig
TM- RyuJin

When i read this it made me think of "The Power Of Now" by Eckhart Tolle, and brought me to the conclusion that if you truly live in the "NOW" then you can never be depressed or anxious.

If you suffer from depression or anxiety, it may well be worth a read.

Brian wrote: For myself, the thing that worked for me in combating anxiety and depression was to simply embrace the light of The Force, to let The Force guide me, as difficult as that was at times.

In all honesty, it could easily be said that one must develop a sense of "mindfulness" in order to connect with the Force...[/color]

I tend to agree with this statement, Shinzen.

13 Dec 2013 01:21 #128493 by Rickie The Grey
Replied by Rickie The Grey on topic Using Mindfulness to overcome depression...
I think mindfullness is key to dealing with and connecting with all our life issues. I mean really what else do have to work with but what we carry within ourselves? We have everything we need. We're not always good at working with it.

Less More
13 Dec 2013 01:53 - 13 Dec 2013 01:54 #128499 by Manu
Replied by Manu on topic Using Mindfulness to overcome depression...
Many people who are usually drawn to these philosophical forums go through what Lisa describes as the Intelligence/Hapiness relationship: 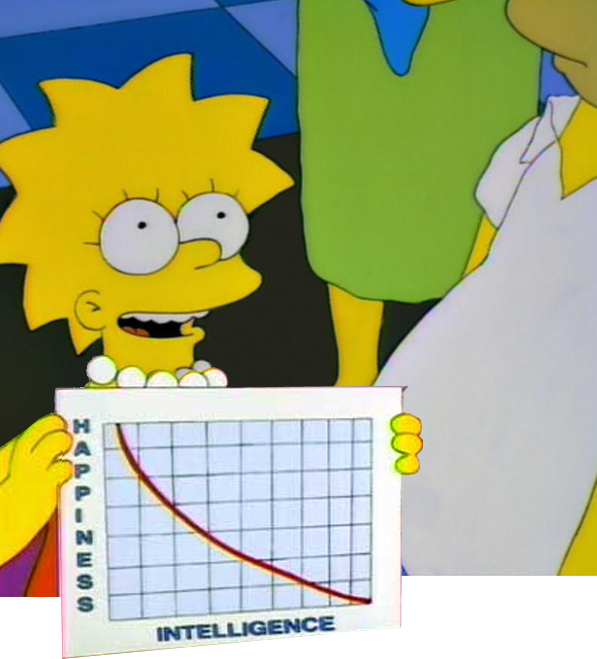 It took me quite a few years, but luckily I was able to shrug off taking myself to seriously, otherwise I would have ended up like Kurt Cobain. This is a video that I think illustrates things well:

Problems that remain persistently insoluble should always be suspected as questions asked in the wrong way - Alan Watts
Last edit: 13 Dec 2013 01:54 by Manu.